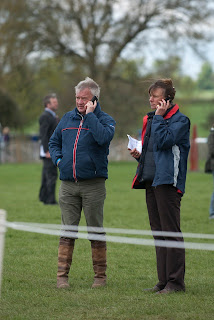 But who will get the selectors’ call…..

I know it’s probably a little early to be discussing team selections for the World Equestrian Games but I really couldn’t wait for Barbury before speculating a little from whispers I’ve heard. There must be a number of national team selectors around the world scratching their heads as to how they are going to break the strength of the Americans, and particularly the Australians in the forth coming WEG festivities. That is any other nation that might otherwise has a reasonable chance of collecting a medal!

Paul Tapner’s Badminton win is guaranteed to promote him off the Australian subs bench to first squad, and he could take either (or both) of his Badminton rides to Kentucky, and with a small battalion of other horses in reaching distance of winning at 4* it would be foolish to leave him off the team. Whilst I think of it, doesn’t Paul Tapner remind you of the young Andrew Hoy? (laidback, but serious and focussed, likeable too) And what has happened to Andrew Hoy? I’d thought he dropped off the planet, but then remembered he jumped the channel to Germany. Seems to have the odd entry here though ( Houghton 2* in a few weeks time). Needs to update his website.
Anyway I digress…..back to WEG….
Clayton Fredericks is probably still a contender for a place although we’ve yet to see Ben Along Time out this season, and whilst Clayton probably didn’t have the best Badminton he delivered a very polished Dressage performance. As someone who does well under pressure I’m sure he’d be a little more focused at WEG than he was at Badminton.
Sam Griffiths has also done really well lately with a podium placing at both Badminton & Burghley, so at the very least deserves the first reserve spot, and I must confess to be scratching my head about who should fill 4th spot, Lucinda Fredericks or Bill Levitt I suppose.

I can’t help but feel a little sorry for Matt Ryan, having lost his last 4* ride (Bonza Puzzle retired), and not quite sure which team selectors to court next.

The Americans, like the British, have always done well on home soil and have to be strong contenders for a WEG team medal. The seemingly unstoppable Phillip Dutton will undoubtedly figure in the line up, along with Karen O’Connor, Amy Tyron, Bruce Davidson and Boyd Martin, who are all proving consistent of late.

I suppose the only certainty for the British team is William Fox-Pitt, and Oliver Townend would be conspicuous if absent. Mary King has been quoted as saying she feels she’s done enough for a place on the team, which no doubt she has. Which leaves a slot open for any of the following; Tina Cook (fantasic horse, rider a little hesitant on XC at Badminton), Lucy Weigesma (making some real headway now), Nicola Wilson (perhaps needs a little help with her dressage) and Daisy Berkeley (who’s horse is getting on now, and I’m not sure older horses air travel that well).

For me the dark horses at WEG will be the Kiwis. For the last 6 years or so they’ve always been just off the pace compared to the previous 6 or so years, and it has always proved difficult for any of the foreign riders based here to pick up the best horses, always riding someone else’s cast offs. This can prove successful though, as Mark Todd proved this year at Badminton with Grass Valley coming a creditable 18th (bare in mind this is only a young horse who had completed 2 CIC*** just weeks before Badminton), a horse that a few other decent riders turned down.

There are a number of decent kiwi’s getting placed at 4* level at the moment; Andrew Nicholson (of course), Caroline Powell (although her lovely horse Lenamore has earned retirement), and Dan Jocelyn who would probably benefit from a new horse or two.

The Germans should never be discounted, or the French, but they do (across the board) struggle to be consistent the other side of the pond.

Now, do I publish before Chatsworth, Luhmuehlen or Barbury, or shall I wait…….sod it!

Note to self: When Olympic stable mate found, consider placing with rider from down under based here.

Another great day at the Symm International Horse Trials at Hambleden today, albeit in more misty, overcast, and beset with heavy rain at the end...