It’s Press Junket Day for Badminton, as they unveil the cross country course to media with a drive around the Deer Park in Mitsubishi 4x4s.

The Press Release from today talks of accuracy being the key to success on this year’s course, which in itself is nothing new for any 3 or 4 star event, and I can’t help but be a little disappointed that there is nothing really new on the course and hasn’t been for some years.
Here’s how I read the course:
The first and last fence haven’t changed in essence for a number of years. 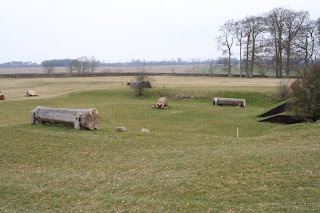 The first ‘test’ comes in the Quarry, but here again a number of tried and tested logs provide the obstacles with no real visionary change (down one side, up and down the other side of the quarry). Yes it may well catch out the odd inexperienced rider as it did in 2008 (Dee Kennedy), but it’s a safe 3 star fence complex, up to height but not imposing.
Huntsmans Close follows the quarry and here again there is nothing new, yes it will cause some problems for the inexperienced but it’s been like this for some years now. It is a 4 star question though.
Over those now familiar Wadworth Barrels and onto the lake. and here once more there is little imagination for what is generally considered the show piece fence complex, another ‘safe’ 3 star option.
Over the bizarre roofed table and onto the Sunken Road, where I have to say I think the first real test lies, the profile and position of these ‘egg’ shaped obstacles requires riders to have gathered up their mounts after the long gallop down to ensure they don’t fall into the road or glance off the cleverly designed eggs.
On down to the Farmyard, and here’s once more nothing to get excited about, two corners on curving stride, something we’ve seen in this spot for some ten years now, hardly inspired.
The Pond I’ll admit does bring a little variation to an old theme, and at this point in the course I think it will catch out more than one experienced rider. Essentially 2 brush fences must be negotiated on an acute angle either side of the pond. But it’s not a masterpiece for spectators to marvel at.
The Vicarage Vee I’ve always thought was a clever use of the natural landscape and does deserve it’s place in the 4 star annuals.
The Bank hasn’t changed in some 10 years and another ‘safe’ 3 star fence, followed by another spread fence over the ditch.
The Shogun Hollow brings a tried and tested combination together, which is rather dull and not that difficult for those concentrating. It’s also a place to take the longer alternative if you’re worried about the corner as you have plenty of galloping ahead of you to make up the time. Again, a little uninspired and something we’ve seen so many times before without the wow factor.
On over the Shooting Butt that is less imposing from the back of a horse than you may think and onto the corral. Here’s where I think they’ve really missed an opportunity, as it’s as straightforward as a novice fence, and when you look back to the 1980’s & 1990’s you’ll find much better examples of this theme were here at Badminton.
The staircase is a test of the brute strength needed to climb it, but once again this hasn’t really changed in 10 years – safe.
The last fence worth mentioning is the Owl Hole and Double Logs, and the only reason someone might have a problem here is if their horse is knackered out. A quick glance at your watch will tell if you should take the alternative at the logs or just take it steady. So late in the course no one will be rushing this fence anyway, so again, it’s another safe 3 star fence.
Don’t get me wrong, all of these fences are up to height, and it’s a long enough course to make it a 4 star event, I’m just a little disappointed that for a Global Showpiece Event like Badminton the whole thing is a little uninspired and safe. A good year to be a Badminton first timer.
Perhaps in another post I’ll make a few suggestions for next year.
Now what is interesting about this year’s Badminton is the Grassroots Championship and how much of that course sits along side the main course. This, I’m sure, will prove very challenging for the amateurs, but more on that in another post.

Burghley In Your Pocket

“The Book What I Wrote…”

No, it's not the memoirs of a life with Morecombe and Wise, or an autobiography, although this blog post is in danger of becoming one!...